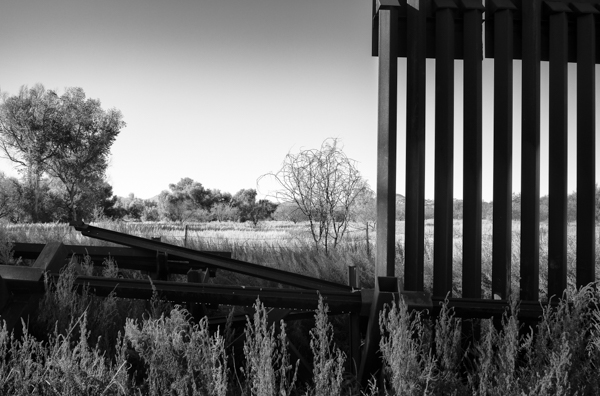 There’s nothing pretty about morning in Naco, Arizona. There’s no soft, early light. There’s no lingering cool of the waning night air. There’s no sense of leisurely awakening, no hint of the unfolding promise that a new day offers.

In Naco, the day wakes hard and quick. At the sun’s first rise over the Mule Mountains, it sprays the high desert with a fierce light that burns the eyes and, if you’re foolhardy enough to be driving east at this moment, reduces your vision to a fireball of intense whiteness. At 80 mph, it’s terrifying.

A switch is thrown and what scant pre-dawn breeze there was shuts off, leaving in its absence a stifling stillness. The heat follows immediately. Yesterday’s dust, lying where it spent the night, warms and rises from the ground, preparing to cling to whatever passes. My left arm, bearing a trucker’s burn from days of driving, tingles with the touch of the sunlight.

By 8 o’clock, the unforgiving potential of the day is on full display. If you awoke thinking that you, a bipedal spec of life, were somehow in command of the world around you, then morning in Naco, with its sun and heat and dust and dead air, will disabuse of that notion. Who’s the boss, asks the day? I am, it answers. I am.

I am learning this lesson as I am eastbound along a dirt road that parallels the steel fence demarcating which half of this desert belongs to Mexico and which half belongs to the United States. This is the same fence that Donald Trump wants to replace with a “great wall.” I stop frequently – to make a picture, to note where the fence changes height or material, to talk to one of the Border Patrol agents who sit in their parked white-and-green trucks every half-mile or so, engines running to power the AC and cabs facing south, ready for pursuit.

After several miles of flatness, the road slopes gently upward. I stop, get out of my car and walk up a short, rocky slope. I can see easily over the wall. A short distance from the fence a cluster of industrial buildings and conical slag piles mark a mine, perhaps one of the many copper mines that accounted more than a century ago for the founding of both Nacos – the one in Arizona and its cross-border counterpart in Mexico. It is an incongruous presence after so many miles of nothingness.

A quarter-mile past this point, the road both rises sharply and deteriorates from well-graded dirt to deeply rutted gravel. My German SUV, despite its fancy all-wheel drive, is not up to the task. This is truck country. I clamber the 100 yards or so to the top of the hill, where a heavy-duty cattle guard spans the road, a further deterrent to any curious motorist who has made it this far. I find myself breathing rapidly, robbed of air by the heat and the altitude, and am reminded, unwelcomingly, of my age.

Below me to the east, the road and the fence continue. The landscape is ugly and harsh, even though there was rain a few days earlier. The resulting burst of late-season greenery is already withering beneath the brutal punishment of the sun. The earth is grayish-brown. Haze hangs in the air, masking distant mountains and obscuring the route of the fence at its farthest reaches. The rusting, metal ugliness of the fence and the slate-colored scar of the road fit right in, man-made footnotes to a work of nature whose thesis can be summarized in two words: Keep out.

There is no sound. The sun arcs upward without a whisper. The air speaks nothing. The dust waits muted. The sweat, already running into the rims of my glasses, slides in silence across my skin. I have never felt so alone.

Then comes the bird. It is a hawk flying 50 feet above the ground, moving from south to north. It glides with innate purpose and strength of wing over the wall. It doesn’t hesitate, doesn’t falter, doesn’t concern itself with documentation. Is it an American hawk coming home from a night of hunting on Mexican soil? Is it a Mexican hawk sneaking into the United States to deprive American hawks of snakes and rabbits?

It doesn’t matter does it? A century ago the hawk’s ancestors flew this land. They lived under the sun and in the heat, finding sustenance in a forbidding land that has killed thousands of men, women and children who have tried to cross it. And centuries from now, after this steel wall has rusted into ground, the hawk’s descendants will fly this same route, looking for ways to sustain its life and those of its progeny.

As people do. As people will. Wall or no wall.