Grab Shots: Get Some Perspective 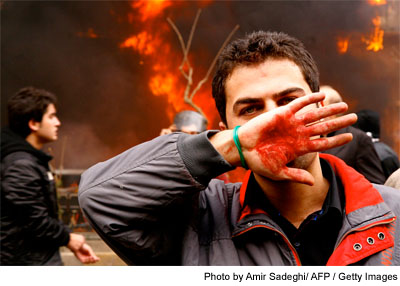 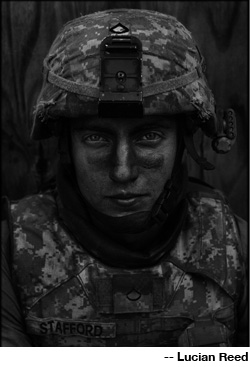 The battlefields change, the combatants differ, the technology improves, but some things about war remain constant: Soldiers are young, innocents die and photojournalists capture the carnage. Great human photography often emerges from terrible circumstances. Here are some examples from Afghanistan:

* The Long Haul: The Digital Journalist has a piece by photojournalist Lucian Reed about his life and work in Aftghanistan. It begins: “I’ve been to Afghanistan eight times in the last 18 months. My apartment is slowly taking on the look of a caravanserai. I have more friends in Kabul than Manhattan. My mind is full of snippets of Dari, counterinsurgency strategy and half-remembered warlords, major and minor. My son – not yet quite born – will have a Pashto middle name. I make no claims to being an expert on the place but, God knows, I seem to love it.”

* Field Test, Under Fire: Freelance photojournalist Danfung Dennis writes a technical piece on on DSLR News Shooter about using the still and video capabilities of the Canon 5DmkII in Afghanistan. He starts: “The 5D Mark II is capable of unprecedented image quality, but since it is a stills camera, there are several limitations that I had to address before using this camera in a warzone.”

* Getting Exisential in Afghanistan: Photojournalist Chris Hondros trails a platoon of GI’s on a hunt for Taliban caves. Stuck halfway up a hillside he ponders: “Why am I here? How did this happen? Why exactly am I hanging on the side of a mountain in Afghanistan this morning?  I’m not in Army, I didn’t sign up for this. I should be back home, watching TV or canoodling in bed or having a strong espresso in Brooklyn. Or just about anywhere else.” (In dscriber.)

* Gallery of War: Visit Battlespace, a powerful online gallery of images from Iraq and Afghanistan.

Link-gathering while I’m on hold with Adobe: 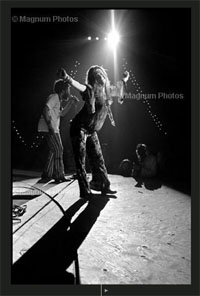 * Woodstuck: Magnum puts up a slideshow of photos by Elliot Landy from Woodstock. And, yes — since you asked — I was there.

* Crazy, man, just crazy: Dirck Halstead at The Digital Journalist gets asked, “Why would you be a photojournalist today?” And answers, “You have to be crazy.” Then adds: “I have always considered being crazy as important to a photographer as being curious.”

* Taking the biz out of news business: Jack Shafter says at the Slate that what’s bad for business just might be good for journalism: “If the downside of the battered-down barriers to entry is less pay and lower status, the potential upside is that a flood of new entrants into the field could portend a journalistic renaissance.” Now, let’s see about getting paid.

* Putting the bizz into journalism: National Press Photographers Association has a toolkit of business practices.

* Eddie Adams reviewed: Sportshooter has a review of “Eddie Adams: Vietnam.” One quote from Adams: “Making pictures in Vietnam is easy…Things are happening all around you and you just have to press a button and not get killed.”