On the Job: College Catalog Cover 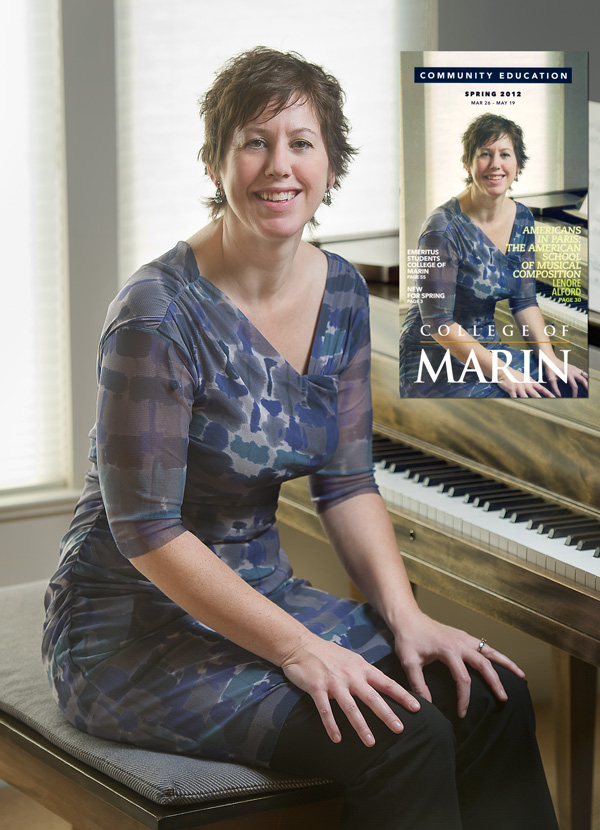 Even after putting  30 years in at the media factory, I still like getting the cover. It must be an ego thing, because it certainly isn’t the money.

This is Lenore Alford, an organist, conductor and generally all-around smart woman. I photographed her for the College of Marin, where is she teaching a class on Nadia Boulanger and the American School of musical composition in Paris — heady stuff, indeed. The college needed a a tall vertical for its community education catalog cover and Alford was the perfect subject.

The picture was made in the Mill Valley living room of one of Alford’s friends.  The piano, a baby grand, was crammed into the corner and up against a set of large, bright windows that flooded the room with morning sunlight.

I didn’t want to shoot into the windows, fearing the backlight, so at first I tried shooting away from them and toward the wall behind the piano, lighting Alford with a ProFoto D4 head into a small box. The background, though was too messy to put type into and I couldn’t blur it because I couldn’t get her far enough away from the wall.

So, I embraced the windows, deciding to blow them out and use their avalanche of light for the background. I changed Alford’s  position, took down the ProFoto, and set up a Nikon SB800 on a boom, attached a small softbox, turned the power way down (about 1/16th) and inched the light to within two feet of her head. The sunlight provided fill and tossed in some rim light as a bonus.

There is nothing technically complicated about this picture or, dare I say, artistically unique, but it is something that’s part of my daily life in my third or fourth or fight career (who’s counting, anyhow?) and might be interesting to those of you who wonder what photographers who aren’t Annie Leibowitz or Chase Jarvis do all day.

The hardest part of the shot was deciding on the lighting, not once but twice, and making those changes while Alford, the art director and the homeowners looked on — and making everyone feel not only like I knew what I was doing but that were being included in something fun.

The whole thing, from walking in the door with the gear to  schlepping it back down the drive to my car took less than an hour, a normal shoot here in the shallow end of the photography pool. 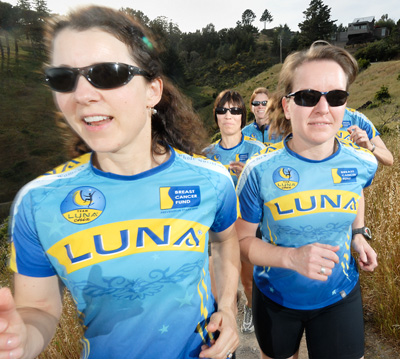 One of my great challenges in photography has been making new techniques work the first time out on the job. I haven’t always been successful at that, so if the job permits (meaning there’s enough time or the art director doesn’t have a specific shot in mind) I usually plan on a back-up shot as well, something I’m sure I can pull off.

I shot the two pictures in this post to illustrate a story in Marin Magazine on trail running here in the Bay Area. The women belong to a Luna Chix running team headed by the magazine’s web mistress.

We chose a trail on Mt. Tam called the Sun Trail because it provided some great views (I wanted the context of the geography) and was close to a road (to cut down on the gear lugging.)

My original idea was to light three of the runners along a curve in the trail (like in the shot below), but after a few test shots I realized it would be very difficult to time the runners so a strobe hit each one as she passed. Also, I was shooting from 100 feet away on a rock out-cropping and would have needed an assistant to help reposition the lights after each test shot. Since this wasn’t a Chase Jarvis-type-budget-shoot, meaning it was just me and five runners, I went for Plan B.

First I shot three of the runners going through the curve. This was my sure shot. They were great sports because it was about 90 degrees out and they ran it a half-dozen times.

Then, I set up four SB800s along an upper portion of the trail — two in front and two along the side — and had them run toward me. When the led runner crossed a line I had made in the trail she shouted to me and I shot the group with a 12mm lens. I could only get off one frame each time since the flashes were firing on full power and needed recycle time, so the team ran it about 20 times. I did several variations of this shot, including backing way off with long lens.

The final shot (above) isn’t perfect, but it worked for the magazine and I learned a lot about lighting a group of moving people outdoors. Next time, I’ll concentrate more on separating each person, targeting them with an individual light and watching their expressions more.

The magazine used the above shot in the index and the below one as the lead shot for the story. 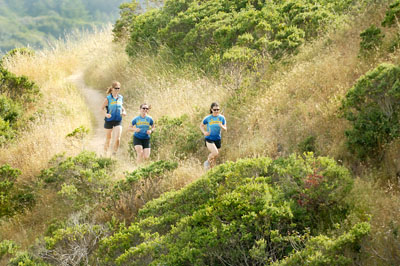