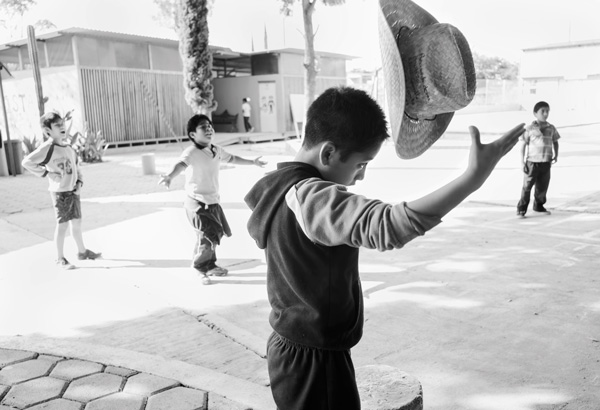 A few months after the death of a good friend – someone I’d only known a short while, but who in that time had touched me deeply – I fell into one of my periodic funks. It was toward the end of summer and despite the good photography I was doing at some county fairs in California a recent birthday had triggered an unusually harsh self-evaluation of my work.

None of it seemed to have any depth. It seemed flashy, contrived and superficial. I wanted purpose. I couldn’t see any.

One morning, I turned, as I have before when I could not inspire myself, to the work of my friend, who had also been a (much more accomplished) photographer. I opened her newest book, which she’d finished just before she died. Her black-and-white photographs documented the difficult life of a teenage prostitute as she’d grown older, mothering a brood of children along the way. The pictures were intimate, made from in close by someone who inserted herself into the tiniest moments of her subject’s life and used her camera unflinchingly, directly and, at times, confrontationally.

I closed the book, somewhat saddened by what I haven’t done, but also emboldened by the passion of my friend. Keep going, she used to say. Go back. Try again. Almost, almost, almost.

Not long after that day, I bought a new camera, a Leica. I wanted something smaller, less obtrusive and more intimate than the big Nikons I still use. I also bought one lens, a 28mm. The camera is digital and therefore still weighty, but it fits nicely in my right hand and I love the smoothness of its metal, the near silent squish of its shutter and the seamless focus of the lens.

It is the latter that has given me the greatest challenge. After years of the rapid, auto grab of the Nikon lenses, focusing by hand was initially frustrating and, now several months later, still can be. I have missed shots entirely and I have focused in front and in behind on many others.

There is an upside though – a big one. The necessity to really look – really, really look – through the rangefinder in order to focus has forced me to slow down. I must be more patient. I must anticipate. And, most importantly, I must trust in my subjects because they, too, must wait for me, and in those waiting moments I find more intimacy.

I do not believe owning a camera similar to the one my friend used will make me more like her. Nor will it by itself improve my photography. But, it is fair to say that in part I bought the Leica for her. Each time I touch it, each time I lift it to my eye, each time I see the frame fill up, I think of her.

A couple of weeks ago, I was in a children’s shelter in Mexico working on a project. A group of boys were kicking a soccer ball toward a fence. There were in the sunshine and I sat in the shade of a large tree. I waited and waited, trying to find focus on the moving shapes – something that would have been so easy with the Nikon – when suddenly one boy stopped nearly in front of me. He took off his hat, held it in his hand for moment and then tossed it back on his head. I made two frames. I think my friend would have like this one (above).