In the early days, when I bought 100-foot-long spools of Kodak film and hand-rolled it into reusable cartridges, when water temperature and strength of developer and acidic pungency were the alchemy of imagery, when the camera clunked and clicked, and when photography seduced me with its promise of capturing, in an instant, the subtle complexities of a baffling world, I walked amid familiar places, hoping to discover the extraordinary amid the ordinary.

Those were lonely days, part of the long hangover from an over-extended adolescence, so I meandered  by myself – through the great green swath of Golden Gate Park; up and down the salted ruins of Sutro Baths on the rim of the continent; in the varied neighborhood parks of San Francisco: Dolores, Buena Vista, Alta Plaza, Alamo Square; and inside Fort Point, the stout brick fortress that squats beneath the beams of the Golden Gate bridge.

During my walkabouts, I made photographs. I pointed my second-hand camera with its inexpensive manual lens at trees and rocks and buildings and an occasional human being, trying to create an image that resembled those I found in the library at City College of San Francisco, where I’d washed ashore when the turbulent tide of the Sixties receded. In my mind, I was a young Edward Weston or Minor White or Imogene Cunningham. In reality, I was an immature young man with little sense of what he was doing. What resulted were terrible photographs. But the act of photographing, the moment of the shutter forcing open the curtain, gave me solace, and that was something in short supply in my life, so I continued.

As you know, the years go by. Many things change. Many things don’t. Friends and lovers come and go, families form and then drift apart, bodies deteriorate and perhaps the mind as well. A women of 57 tells me she sees herself as a teenager. My mother, now dead five years, said in her ninth decade she felt like she was 20. Even I, a grown man whose self-identity resembles a walk through the hall of mirrors in a carnival funhouse, do not “feel” my age. The truth is I don’t remember how I felt at 20 or 30 or 40 so I cannot say with any certainty that I feel different now. I’d say I feel like myself, and some days that is OK and other days I’d prefer another option. Press 2 to continue as another person; Press 1 to be yourself.

What has stuck through the decades is the simple contentment of making a photograph. I still walk to the familiar places, framing again and again the same corners, the same angles, the same perspectives. I carry a better camera, a slick German instrument whose polished metal seems molded to the shape of my right hand. It contains an electronic sensor, but the lens attached to it is manual. The measurement of light – the basic ingenious equation of aperture and time – happens mostly in my head, which is how I was taught. Thus equipped, I revisit my beginnings, looking for shape and shadow and shades of black and white: charcoal, crème, ebony, beige, dun, ivory, onyx, bone, licorice.

Black and white. Strip out the color, let the eye decide on its own, without a rainbow of distraction, what has value, what is worth lingering upon and what merits no consideration.

A simplification in a life of complexity. I am complicated, or so they say. I confess, as I should, because complication often leads to confession and then, if we acquiesce to judgment, apology. Of each of those, I have a substantial inventory. Within the endless array of gray, I find focus. A teacher of yoga once said, with the purpose of us recognizing certain limits: The pose you’re in is your pose. It is as much of a mantra as I have. A concise acceptance of how things are. I return. I go back. I am sticky that way, unable to let go. This is the pose I’m in.

In the fort I find what I’ve come to see: the conical stairwells, the ample hallways, the bounce of the light off the brick, the breezy expanse of the decommissioned rooftop battery, where tourists snap selfies on concrete cannon placements. A uniformed ranger, poised to be helpful, asks through his mask if the visit is my first. I smile beneath my own mask. No, I say, my fiftieth. He is an older man, but younger than I – as so many now are – and I see his eyes twinkle with appreciation. He seems to understand.

I photograph the familiar place. The comfort of being there is almost deeper than any other, that of being wrapped in the entirety of my time. On each return, the images change. I see a shift, a subtle slant of light or shadow due to the hour of the day or the state of the weather. I am more alert – or less. I focus on the photograph, or I allow my gaze to drift to the sea. All of it is just as it should be.

This is the value of returning: to experience the conundrum: everything is different even though it is all the same. 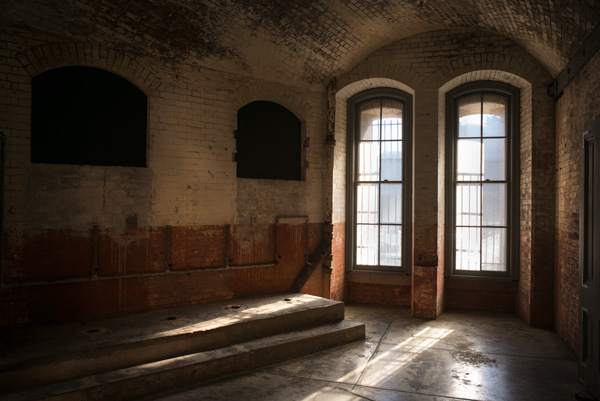