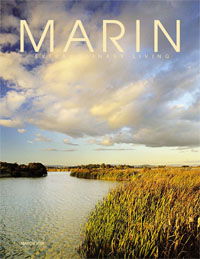 The last couple of months I have been purposefully shooting landscapes with the goal of getting more covers on the magazine. This means I have been going out before first light in the morning or trying to catch the last light of the day, the proverbial golden hour.

The best light in the Bay Area happens during the winter, and that’s especially true here in Marin County, where the almost daily summer fog literally grays out the first morning light and can dull the evening light. Winter also brings rain clouds, something we don’t see in Northern California during our arid summers.

This picture was made in what may seem like an unlikely location — in a bayside marshland behind a sewage treatment plant. What the spot lacks in olfactory appeal, it more than makes up for in its marshes and wildlife. I have shot here several times and made some nice pictures, but nothing I considered having the necessary “grab” for a cover. When I saw this scene in mid-December on a day that had been showery, I knew I had found my moment.

Later, when I showed the editor of the magazine a half-dozen images — from this day and from other locations — she immediately went to this one. The final cover image was about a three-quarter crop from the original, with the art director taking some off the bottom. I had shot the original with the cover crop in mind.