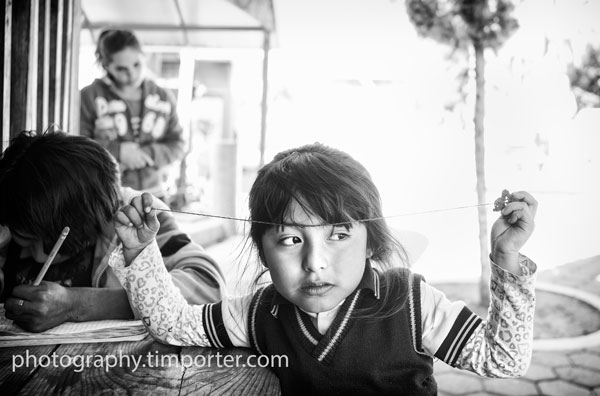 Some things I learned in Oaxaca this month:

* A young mother who lives in a dark, concrete room with her 5-year-old daughter and is struggling to scrape together the pesos she needs for food and rent told me that if you hug another person for 20 seconds your depression will go away. It works. It also produces tears.

* Another mother I’ve been photographing has a son and a daughter. They live in a building of eight rooms where everyone shares the sink, the shower and two bathrooms. A pimp and his prostitute recently moved into the room across from theirs. On the daughter’s 10th birthday, as she was eating a special breakfast her mom had made for her, the prostitute left her room, passed by the family’s open door and teetered into the dirt street in front of the building wearing 5-inch heels and several square inches of blue spandex.

* You can’t take raisins or dried apricots into the women’s prison because prisoners will ferment them and make booze, but dried pineapple is OK.

* You can’t wear a gray T-shirt into the prison, but I do look pretty good wearing a beige women’s sweater.

* The son of one of Oaxaca’s most thuggish and corrupt governors, José Murat Casab, is running for governor. This is a dynasty that makes the Bushes and the Clintons seem like Disney characters.

* Diabetes is everywhere and seems to touch nearly every household. I met a man who lost part of one foot to the disease and is nearly blind. If he had $600, he could save the vision in one eye, but he doesn’t have the money. Down the road, a mother whose only son is confined to a wheel chair is now also caring for her dying, diabetic mom; a 71-year-old farmer showed me a photo of his first wife and his oldest daughter, both dead from the disease; a minister who runs a children’s shelter has a bedridden wife whose kidneys are failing; the aunt of a friend who has a coffeehouse has it; as does my wife’s godfather. A 2012 study found nearly 50 percent of the population affected.

* A lot of dogs never make it to the other side of the highway.