Let’s get one thing clear: Writing is not publishing and publishing is not writing. To write is to transfer ideas from mind to words. To publish is to distribute those words to an audience. 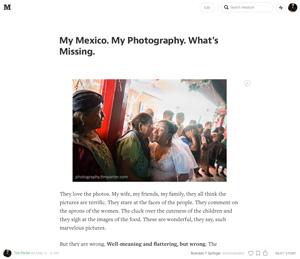 To me, this is an important distinction, the difference between an act of creativity and a means of transportation. That’s why when someone refers to a piece of software or to an internet site as a “writing tool” I become perturbed.

That’s why I take issue with Medium – which I love as a reader – describing itself as “the best writing tool on the web” or when a Medium user calls it “a fantastic writing tool” or when Ev Williams, Medium’s CEO, says the company’s goal was to build “a great tool for writing.”

Sorry, folks, but Medium is not a writing tool. It is, as Medium itself proclaims, a “publishing platform for on the web?—?or anywhere?—?for words and pictures,” one “that started with the writing experience itself.”

The key words here are “publishing platform” and “writing experience.”

Digital publishing requires a distribution mechanism (software) and the one provided by Medium is certainly versatile and easy to use. Kudos for that.

Writing requires nothing other than a brain (some would argue even that is not a prerequisite) and a means to record the words. In that sense, a pencil is a “great writing tool.” As was the typewriter I used in my first reporting job and the IBM Selectric in the next one – both dropped words onto paper in rapid if sometimes erratic fashion, words that were then distributed by a “publishing platform” called a printing press.

Of course, publishing in the digital world is cheaper, quicker and – most importantly – more widely accessible than in my days as a reporter. Software and publishing platforms such WordPress and Medium and Twitter (and before that Blogger and Movable Type) removed the gatekeepers and opened the communication floodgates (for better and for worse).

Writing is the same, though. It’s still hard, it’s still difficult to get it right. The words still come out one at a time whether they’re landing on paper or on pixels. The language is the same, the rhythm as well. Occasional brilliant thoughts don’t change, nor do the more frequent clunkers.

So, thanks Medium for providing a beautiful means of sharing my thoughts, of publishing my writing and of interacting with a community of other writers and readers (all good things)?—?but whether I type those words (using my keyboard writing tool) into your lovely, clean interface they look they same as they do when I type them into a Word document or into WordPress window.