My Mexico is Missing in My Photography 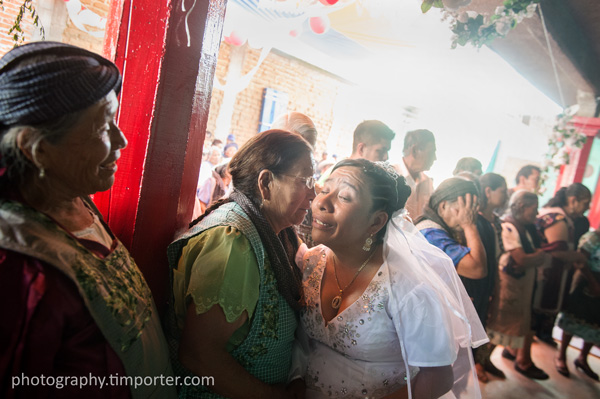 They love the photos. My wife, my friends, my family, they all think the pictures are terrific. They stare at the faces of the people. They comment on the aprons of the women. The cluck over the cuteness of the children and they sigh at the images of the food. These are wonderful, they say, such marvelous pictures.

But they are wrong. Well-meaning and flattering, but wrong. The photographs are inadequate. They are incomplete. They don’t capture what I saw. They don’t communicate what I heard. They don’t convey the feelings I felt when I made them. They lack as much — if not more — than they contain.

So much is missing.

The heat, for example. Where are the streets roasted by the sun into hot concrete slabs that scorch the feet? Where is the smoky sweatiness of the kitchen where the women are cooking, their golden skin glistening and their gold teeth glinting through the haze? Where is that room in the house, the one with the refrigerator filled with Corona and Coke, the one so dark that its corners disappear into blackness, the one in which the bride, still encased in the frothy spume of her synthetic gown, seeks haven from the heat?

And the drinking. Where are the groups of men who sit on shaded street-corners and underneath trees and drain bottle after bottle of mescal all day long and into the night? Where are these men who stare at me, curious and friendly, when I arrive and ask directions? Where are these men who watch me, slack-eyed and smirking, as I walked through town at dusk en route to the highway? Where the shots of mescal at the wedding breakfast, the cases of beer at lunch, and the bottles of both at dinner? 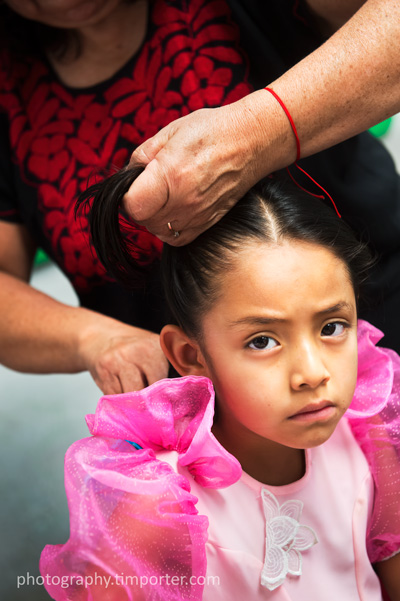 And the stories of the people. Where is young man with the gang tattoos on his face who tells me he’s done five years in a California prison, including a year in solitary? Where is the drunken gatecrasher with the Yankees hat who wants me to come with him to some caves in the hills so he can show me the shards of pottery he found? Where is the lovely older woman who posed for me with her hatchet as she was hacking up the last of the 25 turkeys cooked for the wedding dinner?

And so much more. The animals – the skinny dogs, the condemned turkeys, the flatulent pigs, the shitting cows and the ubiquitous flies, on the food, on the faces of babies, on whatever is alive or dead. The outhouses – reeking in the heat, furnished with encrusted thrones devoid of seats and provided with reading material so that yesterday’s soccer section can be used as today’s ass wipe.  The food – the mugs of breakfast chocolate; the large, tangy tortillas that substitute for forks when ripping chicken from the bone in bowls of red mole; the sticky plastic cups of horchata.

Why don’t the photographs show these things as I really saw them?

It’s possible that I don’t have what it takes to make the photographs I want. Maybe I don’t work hard enough. Maybe I hesitate when I should engage.  Maybe I simply lack the creative eye to see through the camera what I see without it. If this is so, then it explains why other photographers return from scenes just like those I’ve been in with images that are much more powerful.

Another possible answer is that photography by itself is not capable of capturing everything a photographer sees, hears, and otherwise experiences. This seems self-evident, doesn’t it? After all, a still photograph is a limited representation of a moment. It lacks the sound, the smell and the other tactile sensations of the actual instant.

Of course, I prefer the second answer to the first because it is not a condemnation of my abilities, but the truth is that both possibilities are dissatisfying and deflating.

If indeed, as I sometimes suspect, that I just don’t have the talent or the drive or the know-how to make great photographs, then, naturally, that would be depressing. But, equally disappointing would be the realization that photography, a pursuit I wanted to follow since I was in my 20s, lacks by its very nature, meaning its capture of a brief instant from an endless stream of moments that together produce a memorable experience, the ability to convey that experience from one person to the next.

There is a third option, though. It could be that I ask too much, that I want photography to be the means by which I fill the holes in my life and when it doesn’t I blame the images for their incompleteness, condemn the craft for its impotence, or indict myself as talentless.

This supposition carries the advantage of preserving what measure of self-esteem I have about my work as well as giving photography the respect it deserves as a tool of communication and journalism, one wielded with great impact by many photographers more talented than I.

Some of those holes, those devoid of personal satisfaction, moral fulfillment and social purpose, journalism once filled. Not every day, of course, but often enough to keep the drudgery of the daily deadline at bay. Journalism is a story-telling mechanism. This is important to me. I believe in the power of the story as a means to produce social good (and, for me, to enhance self-worth).  I also believe the purpose of telling the story is to affect the reader (or the viewer or the listener), to cause a reaction, be it emotional or intellectual.

My photographs are not telling the stories I want to tell, and these days those stories have to do with the Mexico, or at least my Mexico.

In my Mexico, the nights can be so silent that only the rush of the evening wind en route from the mountain to the valley catches the attention of the ear. In my Mexico, the cities are besieged by a harsh cacophony of honking vehicles stuck in clogged streets, boom-boxes blasting disco tunes from sidewalk stands, and of a nocturnal canine orchestra that never sleeps.

My Mexico has markets laden with towers of fresh fruit, aisles of locally grown and slaughtered meat and colorful comedores that serve platters of homemade enchiladas and tamales and moles. My Mexico has food contaminated with agricultural poisons and human waste and water no human can drink without risking intestinal disease.

My Mexico is limited. It is mostly Oaxaca. My Mexico is vast. It reflects the history of all of Latin America and represents the current social, political and economic conflict of an emerging democracy.

My Mexico is missing in my photographs and I want to see it there. Is this asking too much? Of the images? Of me? 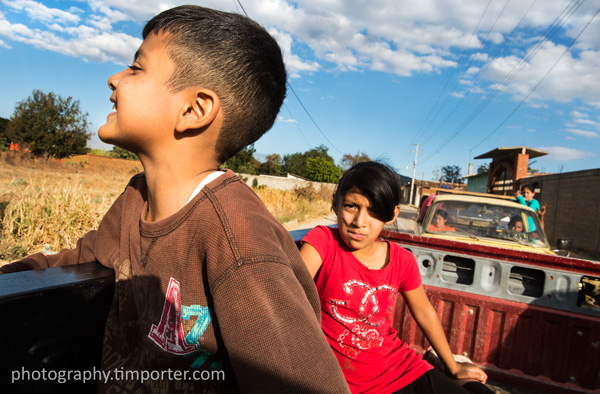