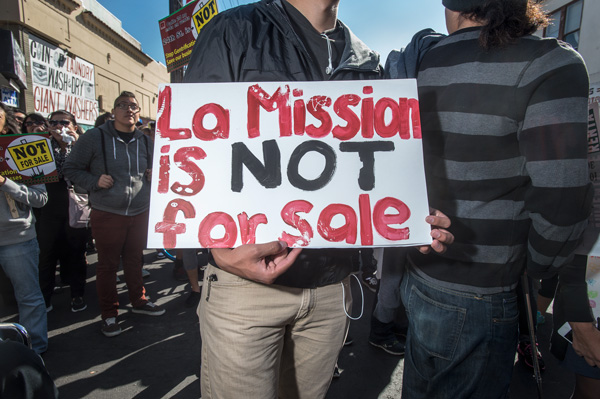 If San Francisco’s Mission District were a wild animal, it would be on the endangered species list.

The neighborhood is hunted by predatory real estate developers who toss out longtime tenants like last week’s garbage, encroached upon by relentless and City Hall-sanctioned gentrification, undernourished by new immigrants (who can no longer afford to move there), and infected with an invasive species of screen-staring clones who seem so culturally unaware that one wonders if they realize a real world exists outside of their digital lives.

Yesterday, those who prefer to keep the Mission ethnically diverse, affordable (for San Francisco) and cross-culturally vibrant gathered at 24th and York streets to march and to protest the attack on their home turf and, hopefully, ignite a broader, citywide effort to preserve working-class San Francisco’s neighborhoods in the face of increasing upscale development and what is essentially the legal deportation of anyone who cannot afford $5 coffees, $200 jeans and $4,000-a-month rents.

What is happening in the Mission saddens and enrages me. I came to San Francisco poor and damaged,  a refugee of the Sixties. San Francisco welcomed me with affordable housing in its then-fringe neighborhoods (Precita Park, Bernal and the Outer Mission), hands-on jobs that paid the rent (delivering newspapers, hotel banquet work) and an opportunity to drop back in via a low-cost city community college that itself now borders on extinction because of neglect and incompetence.

Without any of those things, I would not have been able to have the journalism career I did, to buy the houses I did, to pay the taxes I do, and to contribute, as I can, to the world around me.

Those opportunities will not exist in a San Francisco that eats its own culture, that destroys itself by driving out the very people who make it unique, that chooses development over diversity. The City — as we called San Francisco in my former newspaper — will become just a city.

The 24th Street march, as demonstrations go, was small, but the message was big. Sadly, San Francisco’s last remaining full-size newspaper,  the Chronicle, couldn’t be bothered to cover it (it did find the means to report on a skateboard contest that happened at the same time — shame, shame, shame).

However, Mission Local, the local news project of the UC-Berkeley Graduate School of Journalism, was there and live-reported the event. And, much has been written about the gentrification of the The Mission and increasing use of the state Ellis Act to force evictions citywide —  by Tim Redmond, by El Tecolote and, yes, by the Chronicle.

My pictures are below. In them you see the faces and energy of The Mission — and the soul of San Francisco. Let’s not allow them be wiped out.