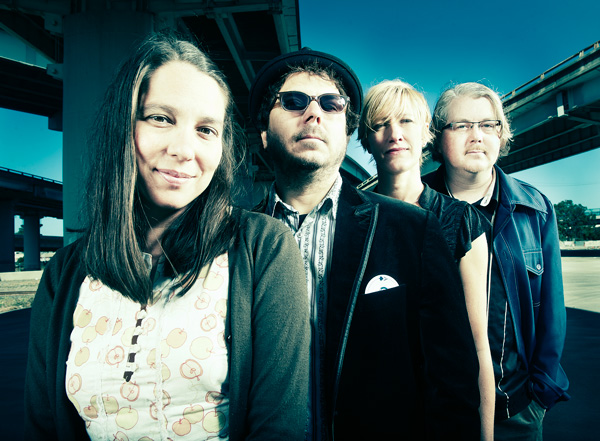 One of the treats of working with Marin Magazine has been meeting Dan Jewett (right), who by day is the magazine’s managing editor and the rest of his time is the guitarist for The Hollyhocks, an Oakland indy band that also includes Dan’s wife, Yuri (bass, vocals), Jason Silverio (drums) and Kristin Sobditch (guitar, vocals).

The Hollyhocks new CD, Understories, came out this week and tonight it officially debuts at the Makeout Room in San Francisco. Critics are loving the CD, as they should. It’s bright, it’s smart and it rocks — just like the people who made it.

I had the opportunity to photograph The Hollyhocks a couple of times, including once in Dan and Yuri’s home as they were working on some of their new songs, and again for a group shot of the band. For the latter, we fence-hopped onto Caltrans land beneath a freeway maze in Oakland. The picture above came from that session.

I love photographing musicians, in part because I get caught up in the emotion of their music, but also, truthfully, because doing so enables me, a man who couldn’t carry a wounded tune to a hospital, to vicariously share the stage with them. (See my new Music section in my portfolio.)

The gallery below has  more of my photos of The Hollyhocks. Take a look.