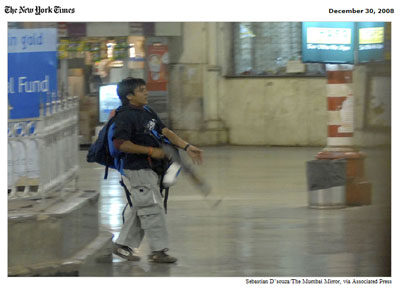 Last year was a tough year for journalism (and many other professions). Newspapers, a dying industry, but still the primary source of original journalism in the world, cut more than 15,000 jobs. Some big ones decided to stop delivering the daily paper. Some smaller ones gave up paper altogether in favor of the Web. And a worse-than-dismal economy guarantees more of the same in 2009.

The decline of print journalism is inevitable for numerous economic, social and technical reasons. But, we have yet to see the sustained emergence of a replacement business model that can underwrite the journalism once paid for by the Daily Fish Wrap.

The proliferation of personal media tools — digital cameras, video recorders and phones — has transferred some of the lost capacity of professional journalism into the hands of everyone. That is a good thing. It means more eyes, more ears, more minds on the watch for news. When I was in the newspaper cattle-prodding business a few years back, I extolled the instant reporting of the London tube bombings by the victims of the attacks. Jeff Jarvis just did the same regarding the recent horrors in Mumbai.

Let us not forget, though, that as beneficial as it is for people anywhere and everywhere to report what they see, they are separated by at least one core principal of professional journalism — obligation.

Good journalists feel an obligation to witness the news and report what they see to their communities — even if that means running toward things that common sense and self-preservation would compel one to flee from as quickly as possible.

The picture on this page is an example of that obligation. Taken by Sebastian D’souza, the photography editor of the The Mumbai Mirror, it shows one of the Mumbai terrorists walking calmly through a railroad station. The New York Times reports that the photo is one only a few showing an attacker clearly. The Times describes the important of D’souzas photos and those of another newspaper photographer, Vasant Prabhu:

“Their photos, some of them unpublished, provide detail and precision that is lacking from other witness accounts. They show brave attempts by police officers to stop the attackers. They also highlight the woeful inadequacy of the officers’ weapons and thus help to explain how just 10 terrorists managed to hold a city hostage for three days.”

Read the whole story. And then ask yourself: Which direction would I have gone — toward the news or away from it?