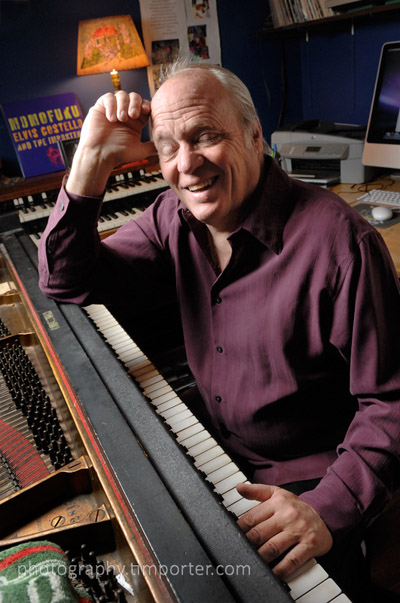 I love photographing artists and musicians where they work. Some have studios, some have garages, some have bedrooms in their homes that double as office, closet and creative space all crammed into a corner. And that’s where I found Austin de Lone, amid his keyboards and computer, wedged into a tiny spare bedroom in his Mill Valley home.

De Lone, known to fans and friends as Audie, is a former stage-mate of Elvis Costello and longtime Marin musician who sings and plays with his soul exposed and his heart wired to an amp. Marin Magazine was doing a profile of him in advance of a benefit he had put together to raise money to fight his young son’s rare illness, Prader-Willi syndrome.

Austin’s cramped studio was a joy to behold–perfectly, artistically cluttered–but also a challenge to shoot in. A grand piano not only dominated the room, but pretty much filled it. The instrument filled nearly one wall, and left only a narrow passage to walk through on the other side. Its top end abutted a closet and at the business end was just room enough for Austin to sit with a desk behind him. The room was also dark, little by only a 60-watt lamp.

In that cozy space, I needed a small light. I had brought along a small, 17-inch square softbox that fit over a Speedlight. I wanted to hang it from a boom over the piano, tight in on Austin so the light wouldn’t spread too much. There wasn’t enough room, though, to fully open a lightstand. I managed to get the legs of one half open,  hung three 15-pound sand bags over them and cranked the boom out over the piano with the light on the end. It wobbled precariously. I prayed to the stability gods and started shooting.

As you can see from the distortion, I was in close, a couple of feet away. I moved around as best I could, but Austin provided much of the action. He played a bit, hummed, sang a few bars, and told a story or two. All in good spirit.

In 20 minutes, I made several pictures I really liked. Austin was completely relaxed and at times seemingly unaware of me and my camera. I’ve seen other artists and musicians do the same in their studios. I think studios become extensions of their artists, a place where the hands and eye and the heart are indistinct from the tools–the keyboard or brush or computer. The studios and the artists meld, and there, even when creativity turns elusive  (as it so often does) they find their most comfort–and in that comfort good pictures can be made.