I’ve been out of the newsroom for 10 years now, and even when a collision of events produces a yearning for the stain of ink and the wretch of deadline, I don’t miss newspapering. And even though I spent 22 years as a working journalist and another three dissecting the dysfunctionality of newsrooms, I’m not sure I really miss journalism either — but the jury’s still out on that one.

What I do miss, though, is covering breaking news (which is not necessarily the same as doing journalism).

Even before 24-hour cable, the infinite news hole of the Internet, and the insta-twitterness of today’s reporting, news was all about the now. It was a story told in a language dominated by Five W’s and a Big D (for deadline). It happened fast, was reported faster, written quicker still, and often forgotten in the next news cycle. If you could focus on the now and forget the later, you could thrive in the world of breaking news — as I did.

I’ve long thought that the character traits needed to do deadline news are in conflict with those that make us better human beings — impatience, aggressiveness, competitiveness, and a relentless search to find the negative in almost any situation, to name a few of the former. That’s why journalism is so complicated: On the one hand it attracts many people whose moral compass guides them toward deep, insightful stories that can right society’s wrongs, but on the other it rewards more frequently people who can feed the daily beast — now the minute-by-minute beast — with headlines designed to grab attention today without regard for the impact they may have tomorrow.

Still, I confess to occasionally missing the rush of big news events. They are, despite the blase facade adopted by the reporters and photographers who cover them, exciting. There is tension, there is conflict, there is urgency and there is a hierarchy of importance of the players involved — at the center the newsmakers, on the rim the audience, and in the middle the media.

I got to return to that space one evening in October at Dominican University in San Rafael, which was hosting the third of three debates between California gubernatorial candidates Meg Whitman and Jerry Brown (who won the election three weeks later). For a few hours I was inside the ropes, shooting the crowd, the candidates and the debate. My deadline for Marin Magazine was the next morning, so I wasn’t filing as the story unfolded like most of those in the pressroom, but it was enough of a crunch to get the adrenaline pumping.

I’m not confusing the fun I had that night with the value of that type of reporting, which is mostly worthless to the average person. Inches upon inches of words and video upon video of yadda-yadda from each candidate and from reporters and pundits keeping score. Some call it horse-race journalism, and that’s apt. I’m not defending the practice; I’m just saying it’s a thrill to ride the horse now and then.

* Slideshow of my pictures. 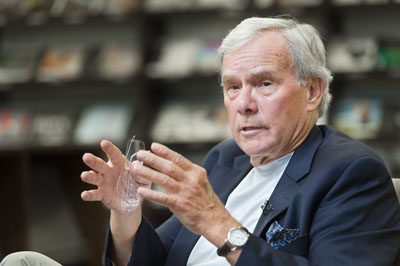