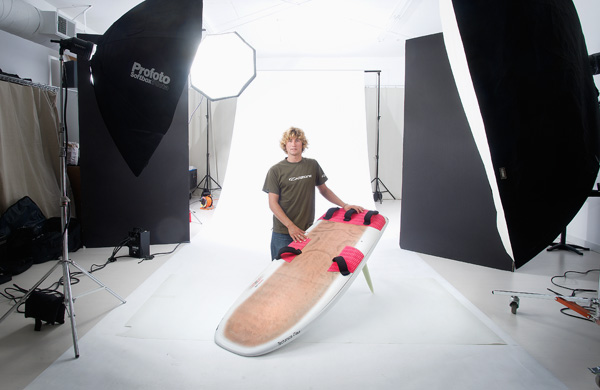 Having the name Johnny Heineken is cool enough, but add in good looks, golden locks, an engineering degree and a world championship in kitesurfing then you’ve got more cool going for you than most 23-year-olds might deserve. Luckily, Johnny Heineken is as laid back as he looks and fun to photograph.

Here he is in the studio in San Rafael during a shoot for Marin Magazine. I’m sharing this wider shot so you can get see  how much of what my wife 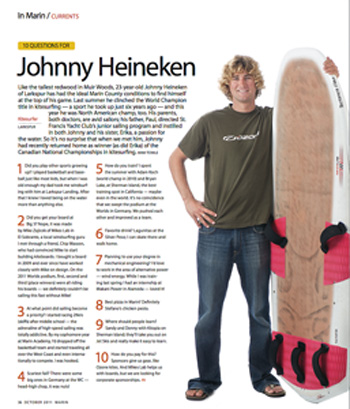 sometimes calls “photo crap” — i.e., gear — is involved in making what becomes a simple white background image when printed. Here there are five lights, three of which you can see and two others behind the black foam boards pointed at the background.

I adjusted the lights several times during this shoot depending on where Johnny held his kitesurfing board (made by Mikes Lab in El Sobrante) in order to keep shadows off his face.

As I messed with technical stuff, Johnny chatted with writer Mimi Towle, who, among other things, learned three key facts about Heineken:

1. Johnny’s favorite drink is a Lagunitas at the Silver Peso in Larkspur.  “I can skate there and walk home.”

3. And, yes, his last name is connected to that Dutch beer company.

Here’s the whole interview. And on the left is how the final shot appeared in the October issue of the magazine.