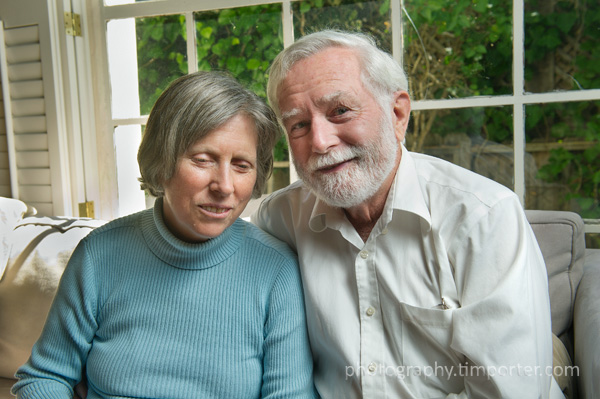 One of the things I miss about journalism is the serendipity of encountering people who, through their strength of character in the face of adversity, remind me of my own good fortune. It’s called perspective, and you can never have too much of it.

For the current issue of Marin Magazine I had the opportunity to photograph a number of people — and write about a couple of them — who have benefited from the kindness of others in their journeys to overcome life’s adversities.

The most moving of these moments occurred when I met the people you see here — Tina and Bill Noble, above, and Tina Hick and her son, Indie, left. All of them are dealing with loss, one in a very intimate way and the other in tragically public manner.

Tina Noble is only 60 and in the latter stages of Alzheimer’s, which she was diagnosed with five years ago. Bill, her husband of nearly four decades, cares for her in their San Anselmo home. Hers is a life of diminishing capacity; his is one of increasing devotion. It is a poignant equation.  After I photographed them on their living room couch, I sat in my car and cried. How many of us are capable of the unqualified love Bill demonstrates daily toward Tina? Am I? Are you?

Tika Hick’s story is more public. A virulent cancer had attacked her. In July, a week before she was to undergo a double mastectomy, she traveled to Maui with her partner, David Potts, and their infant son, Indigo. In a horrific accident, Potts was sucked into a blowhole, dragged out to sea and never seen again. Now, Hick’s life is one of tenuous recovery, one so emotionally fragile that even the presence of a photographer in her small garden can fuel the sadness and bring more tears.

Sad stories, indeed, but also hopeful ones because within them are other stories of kindness, of organizations like Senior Access that benefit couples like the Nobles and of personal giving that supports someone like Tika Hick.

In addition to the Nobles and Hick I photographed four other people. You can see their photos below. Here are summaries of their stories and the organizations that helped them:

* Stephen Levine, who turned to Hospice by The Bay in Marin County when his wife of 24 years, Pam, was dying.

* Mayra Moncado, who learned from the Women’s Initiative how to make her Fairfax salon business a success.

* Pashia Lord, a Marin City mom who found a positive direction through the Performing Stars of Marin arts group.

Here’s the full package in Marin Magazine. My test on Tina and Bill Noble follows:

“Why did I get Alzheimer’s? Why me? And how did I get it? I’m so young—just fifty-five.”

Tina Noble wrote those words five years ago, just after being diagnosed with Alzheimer’s. Today, the former college professor with a Ph.D. in anthropology lives under the 24-hour care of her husband of nearly 40 years, Bill, a retired naturalist.

When Tina does leave the couple’s San Anselmo home, it’s usually to spend the day at The Club, a Senior Access program for people with memory impairment.

“It’s a beautiful place way up on top of the hills in Terra Linda. Sunny. Open,” says Bill. “There is a school next door so there’s the wonderful chatter of young kids all the time. There are lots of interns and aides and resource people. They do everything from elder yoga to having performers of various kinds come in. It’s delightful.”

More than 5 million Americans have Alzheimer’s and nearly 15 million others perform roles like Bill Noble’s, caring for family or friends. Senior Access recently opened another day care center in Belvedere to meet the rising demand in Marin.

Bill and Tina’s daughter, Wren, a graduate student in photography, has been documenting her mother’s illness. You can see her pictures here.