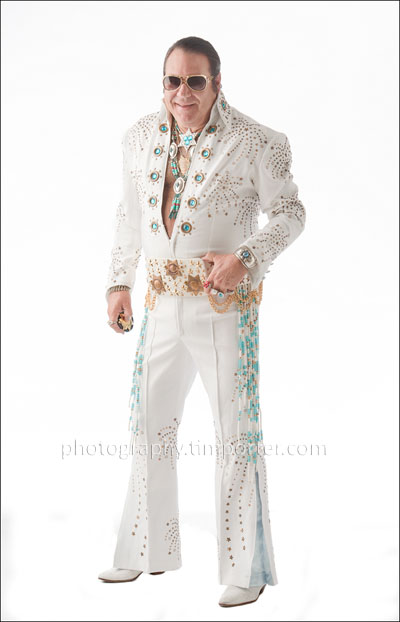 When Bill Palmini breaks out the bejeweled jumpsuit, the badge-studded belt and the fistfuls of gaudy rings to dress up as Elvis the Cop, he’s only half acting. The cop part is real, but Palmini has been impersonating the King for so long (20 years)  that the transformation from chief of public safety at Hastings Law School in San Francisco to the “King of Traffic Safety” that the transformation seems seamless.

I photographed Palmini in my studio for Marin Magazine interview with him. He arrived dressed as understated as a plain-clothes cop — blue T-shirt, dark sweat pants and black walk-the-beat shoes. He carried a wardrobe bag and a steamer trunk. The former held the jumpsuit; the latter the paraphernalia — the rings, necklaces and belts Palmini called the Mr. T starter kit.

The studio “dressing room” is a space set off by a curtain. Countless numbers of people have changed clothes in that studio, and some opt to go behind the curtain and others don’t. Palmini, somewhat modestly, I thought, chose the curtain. The makeover took about 20 minutes, and, I have to say, was astonishing. Not only did the clothes change Palmini, they changed my relationship with him — a large man in a glittering, white jumpsuit commands a different form of attention than just some guy in sweats.

Making the pictures was easy. Palmini struck poses, and I shot. No singing was involved. We finished in less time than it took Palmini to pack up his gear and before I could say I ain’t nothing but a hound dog Elvis had left the building.