I was trying to make a picture the other day, but my camera and my computer wouldn’t let me. Sound silly, but it’s true. And it’s making me think my photography has become more complicated than it needs to be.

I had the studio all set. The paper was out, the lights were up, I’d metered front, back and sides. All good. Then I hooked my camera up to my laptop so the pictures would flow into the computer screen as I shot.

Nothing happened. No connection. Without one, no pictures.  I was using a new camera, a Nikon D4, and the software – also made by Nikon – wasn’t “recognizing” the camera. No problem, I thought, I’ll download an update.

As I began to do that, the clients showed up, a mother and her daughter. The mom is a dancer, her daughter a middle-schooler. I was photographing them for the magazine, full-length on a white background, hopefully with some leaping and frolicking.

We chatted and I told them where to change. I returned to the computer, thinking I could install the software patch before they came back. No luck. 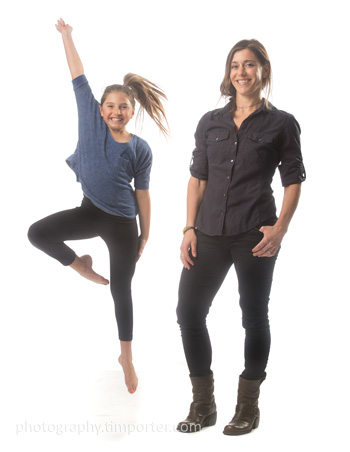 I found the patch, but it wouldn’t install. Nikon wanted the original registration number, which was home on my other computer, plus it required me to install every version of the software between the current one on the laptop and the latest fix – and there were three of those. No time for that.

I opened another piece of software, Lightroom, and configured it to capture the pictures coming from the camera. This was an unreliable workaround because Lightroom sometimes  quits in the middle of a shoot, causing me to lose pictures, but I had no choice.

I fiddled, I fussed, I moved things around and I changed settings on the camera. Things improved. I’d learned over the years that different lenses can produce different exposures under the same lighting conditions, but now I was learning that moving from one pricey Nikon model to another could do the same.

OK, I said, to the mom and daughter, I’m ready. But they weren’t. The 30 minutes I’d spent hacking at the software and moving gear dampened  the enthusiasm they’d walked in the door with. But they were gamers, so they perked up, posed a half-dozen ways and I made some decent shots, enough, at least, to get the job done.

The weirdness with the computer and the lights ate up half the time they had. The shoot felt rushed – because it was. Their faces showed strain at times – because their patience was running out. The resulting images were good, but limited – because there was not time to try other things.

The shoot wasn’t a failure, just less of a success than it could have been. My fault. I should have checked the software compatibility with the new camera. And I shouldn’t have used a new (well, I’ve had it six months, but haven’t used it in the studio) camera on something that had to be done right the first time.

This is me falling on my sword. Ouch.

With the pain out of the way, I can say this: It shouldn’t be this hard to make a picture. Oh, I know, I can hear Michael Corleone saying in The Godfather, “That is the price you pay for the life you choose.” I get it. I just don’t have to like it.

Last weekend I tried a different type of photography, something not dependent a computer or software. Inspired by Mary Ellen Mark and her workshop in Oaxaca (here’s the story of my trip), I rented a Mamiya 7, a boxy slab of a camera that focuses manually, uses film and, because it is a rangefinder, requires whomever is using it to remove the lens cap in order to expose the film (something it took me several frames to remember).

Other than the lens-cap thing (Photography 101, folks), the Mamiya is simplicity embodied. I spent a few hours with it, walking around empty buildings near the ocean, framing windows and doorways and chairs. The roll of black-and-white film in the camera only held 10 exposures, so I devoted more time to looking than actually shooting, making the experience much more about seeing the world rather than capturing it. That patience, yogic-like mindfulness, was intensely relaxing.

Then there was the camera itself – no electronics other than the meter, a body made of smooth, heavy metal that always felt cool in my hand, a lens  silent and smooth as my fingers adjusted its focus and a shutter that just whispers its acceptance of its role, no ka-chunk of a mirror, just an affirmative, soft click to acknowledge the making of the picture.

The Mamiya does demand one more thing – faith. Since it isn’t a digital photo factory, there is no immediate playback to look it, nothing to verify whether the picture is exposed correctly or framed adequately or has any other additional merits as a photograph. It is up to the photographer to have faith in the judgment he or she exercised with the press of the shutter, and then wait hours or days for the film to be developed to determine whether that faith has been rewarded.

Here we have a camera – and a way of making photographs – that is not only mechanically simple, but encourages patience, faith in your vision and technical knowledge (sorry, no histogram, you chimpers).

These are attractive qualities in a world like mine, which is dominated by technology, subject to the demands of deadlines, and often less focused on taking the picture than on remaking it later in the computer to satisfy the whims or needs of clients.